It is hard to build a net-zero building — one that produces more energy than it consumes — in the middle of a city. For one thing, nearby skyscrapers might block sunlight from reaching rooftop solar panels. For another, urban office buildings are cramped for space, and it generally isn’t possible to set up wind turbines on site.

But Martine Rothblatt, head of United Therapeutics, would not yield when it came to the company’s new headquarters. When designers warned that erecting a net-zero building in downtown Silver Spring, Maryland would be a formidable task, she replied, "I don’t care. Figure it out."

"She felt very strongly that you cannot achieve net-zero as an afterthought," said Thomas Kaufman, director of corporate real estate for the company, which develops treatments for rare diseases. "It has to be a mandate at the beginning that drives every single decision."

The result, a 135,000 square foot building known as the Unisphere, which opened in 2018, is described by the company as the world’s largest commercial net-zero building. It reaches far beyond the usual accouterments such as solar panels and LED lights. Rather, it uses a mix of advanced technologies that make the building fully sustainable. 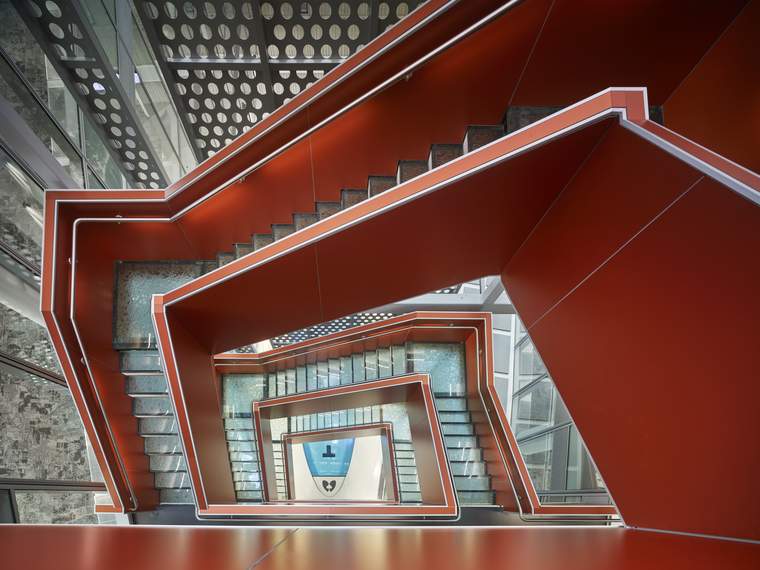 This stylish staircase is meant to entice people to walk instead of taking the elevator. Source: United Therapeutics

Burning fossil fuels to deliver heat and power to buildings accounts for around 29 percent of U.S. greenhouse gas emissions, so policymakers are looking for ways to clean up homes and offices. In 2017, for example, California approved the first net-zero building code in the nation, requiring all new residential construction be zero net energy by 2020, and all new commercial construction by 2030. Mayors from cities such as Portland, San Francisco and New York have committed to similar policies. The Unisphere shows how large office buildings might reach such ambitious goals.

Its system involves thousands of devices feeding into a powerful computer "nerve center" that tracks energy use and coordinates heating, cooling and other operations. Windows darken automatically when it’s hot outside and open up to let fresh air flow in. Air circulates through a quarter mile-long concrete labyrinth 12 feet underneath the building, providing passive heating and cooling — the labyrinth tends to be cooler than the air outside in the summer and warmer in the winter. A pool in the center of the building’s large atrium soaks up excess heat — and also can be used for swimming.

"Also almost all of our occupied spaces are illuminated significantly with natural daylight," said Jared Loos, an architect with EwingCole, which designed the building. "In many instances, the lights within a space will dim or shut off completely and allow full daylighting, especially in the perimeter offices, creating offices filled with 100 percent fresh outside air and 100 percent natural light." 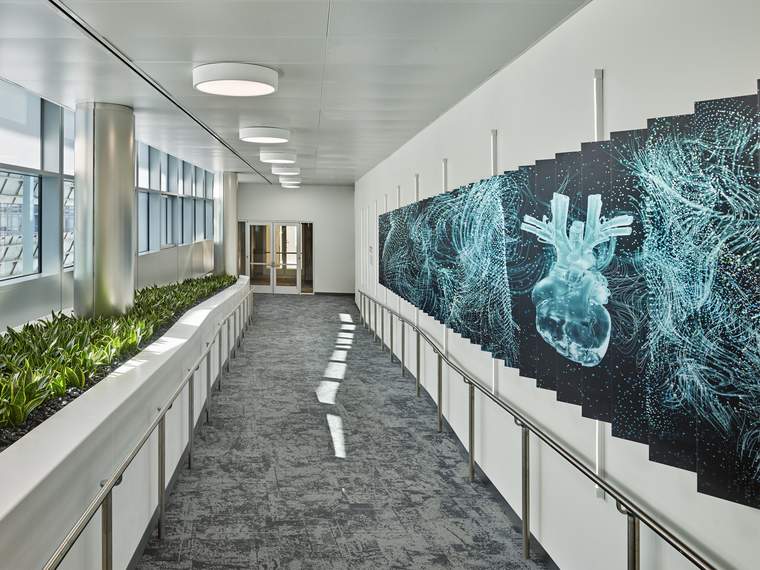 A light-filled corridor in the Unisphere. Source: United Therapeutics

During the day, surplus power from the building’s numerous systems, which include nearly 3,000 solar panels, is sold back to the grid, while in the evening, the grid sells minimal power back to the building. In total, the Unisphere sells more power than it buys.

"Martine stated that we are only going to build the square footage that we can support with onsite renewables — period," Loos recalled. "That is a vastly different mindset than most owners would have when approaching a new project. Most start with a pent-up demand for additional space, or new function and need, and then try to juggle schedule, need and cost to find the right balance."

This isn’t to say there weren’t roadblocks along the way. Initially, the county refused to grant a permit for the buildings’s geo-exchange wells, saying state rules did not allow the placement of wells under buildings. But the regulation was intended to regulate drinking water wells, which is why it requires periodic health inspections. Once state regulators learned the water in these wells was not destined for human consumption, they amended the rule and the county approved the project. 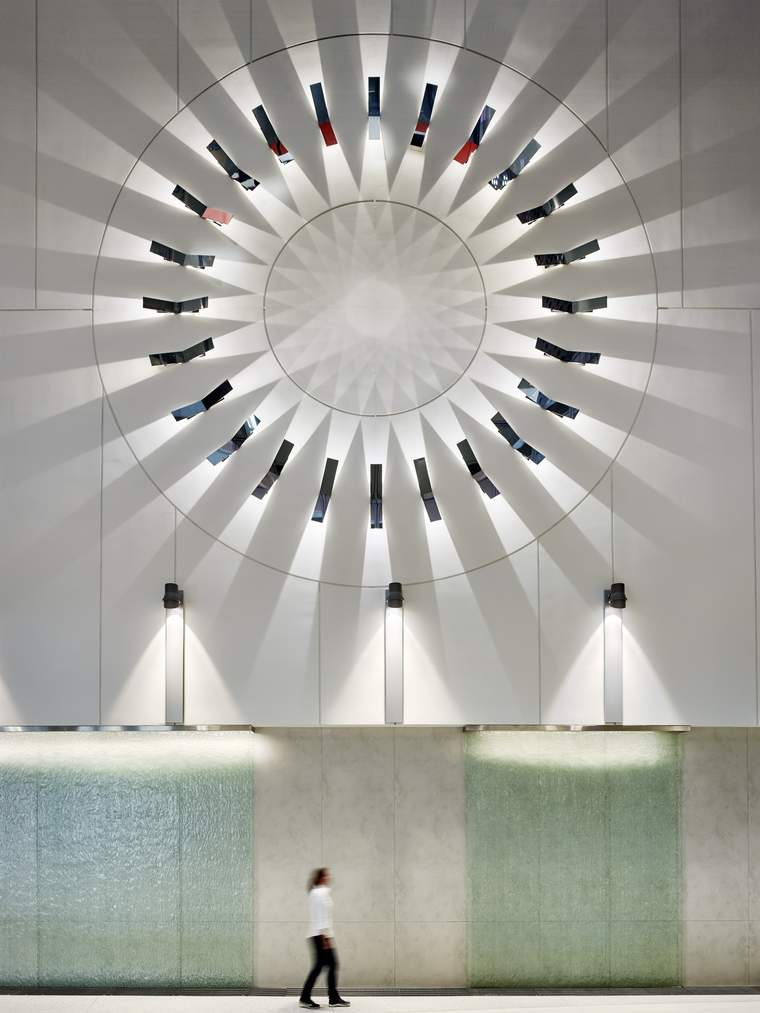 In addition to its net-zero mission, the company also displays animations throughout the building that describe how it uses energy. Its centerpiece is the  energy wheel, an installation in the central atrium made up of a circular array of mirrored lights 24 feet in diameter. It uses real-time data to illustrate energy use. When its lights shine outward, the building is making energy. When they shine inward, it’s using energy.

"It turns complex information into things that human beings can see, feel and understand,” said David Schwarz, a creative partner at HUSH, the agency that made the energy wheel. "Employees walk past that energy dial every day and know they are in a relationship with the building and with its energy."

Rep. Jamie Raskin (D-Maryland), whose district includes Silver Spring, said he was thrilled that the community he represents "is home to this cutting-edge green energy presence."

Shanti Pless, a senior research engineer at the National Renewable Energy Laboratory, agreed. "The Unisphere and the AGU net-zero renovation are both local examples of what can be done in the D.C. area in reaching this level of performance of zero-energy goals in an urban environment," he said.

Company officials won’t talk publicly about the cost of creating a net-zero building. But Kaufman said the price wasn’t much more than some of the company’s earlier buildings.

"The technology is off the shelf," he said. "We didn’t invent anything new. It just required the mindset to make it happen."