The development, which surrounds a neighborhood megachurch, is expected to create 2,100 apartments.

The 11-acre site surrounding an East New York megachurch is on the path to be transformed into a large-scale “urban village.”

Dubbed “Innovative Urban Living,” the plan calls for transforming part of the church’s site on Flatlands Avenue into a huge mixed-use community, with 13 buildings ranging from two to 17 stories, with space for around 2,100 residential income-based units.

The proposal also includes retail space, a day care, a school, parking, a trade school, and a public park. The project, a partnership between the site’s owner, Christian Cultural Center and the Gotham Organization, with Practice for Architecture and Urbanism (PAU) designing, is close to beginning the environmental quality review process with the city. Assuming the approval process goes smoothly, the whole thing would take eight to 10 years to build, according to the developers and PAU.

First announced in December 2018, the project’s stakeholders—which, in addition to the developers and architects, include the church’s owner, Rev. A. R. Bernard—have been meeting with local officials and members of the community. The project would require a zoning map amendment and special permits from the city, and will begin to make its way through the Department of City Planning’s (DCP) environmental review, with a scoping hearing taking place at the church on March 3.

According to the developers, the application for the city’s Uniform Land Use Review Procedure (ULURP) will be submitted this year. They expect to break ground on the project by the end of 2021.

According to the New York Times, Rev. Bernard bought the church’s site in the 1990s from the former owners of Starrett City, which neighbors the site. 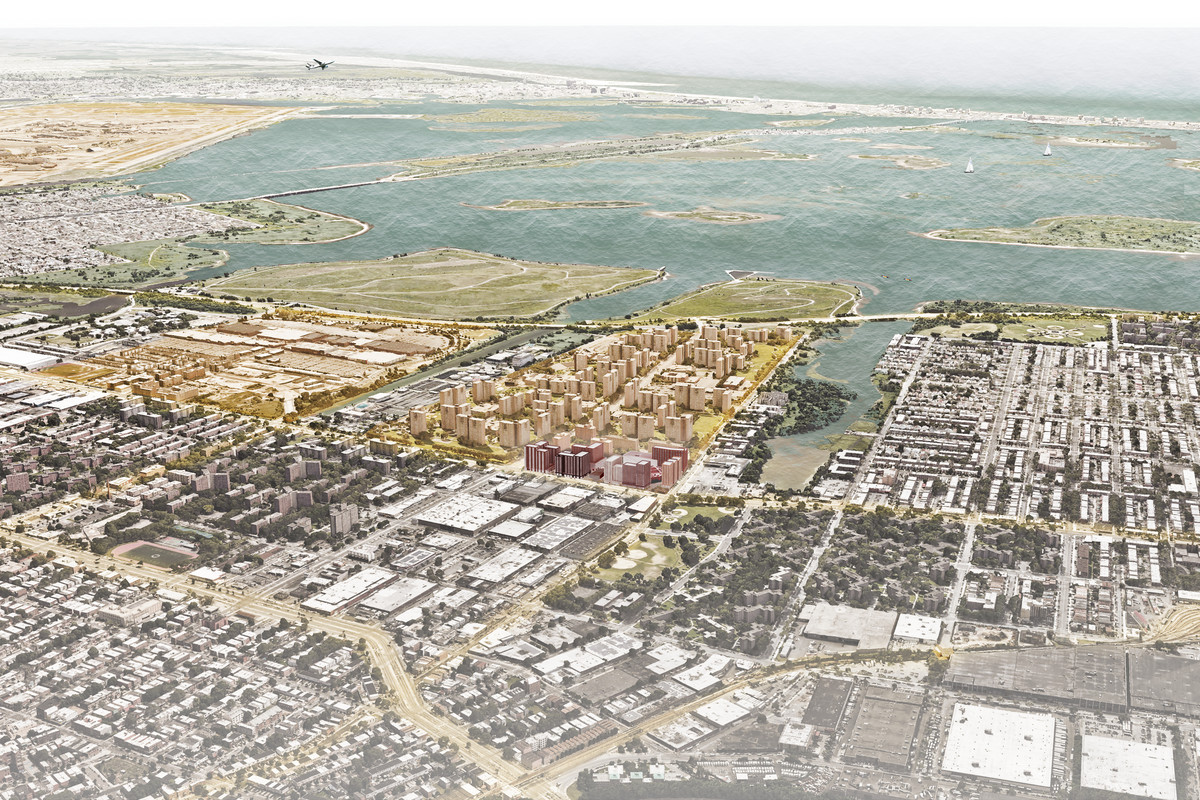 Aerial rendering of the area where the project will be located.

According to PAU founder and principal Vishaan Chakrabarti, the concept is imprinted with Rev. Bernard’s vision to create a community for the area’s residents, with their needs in mind. That includes things like a 24/7 childcare facility and a center for senior citizens.

“Rev. Bernard understood that in good city planning, a community like this should be able to sort of monitor and maintain its own sense of security, basically following some of Jane Jacobs’s ideas about having many entrances, having a lot of eyes on the street—the idea that there’s a lot of people coming and going from the project,” Chakrabarti says.

“We’re not just creating affordable housing, which obviously is the heart of the plan, and incredibly important, but creating a welcoming space for the entire community, the entire neighborhood in terms of public open space, as well as social infrastructure,” he adds.

City Council member Inez Barron, who represents the area, says that during meetings with the developers, she has expressed the need to have housing for income levels between 30 and 60 percent AMI, which matches the community’s income thresholds.

“We are in negotiations to make adjustments to the income band ranges,” Barron says. “I’m not supporting projects at income bands that are not presently represented because that [leads to] people being displaced and gentrification occurring.”

Following its 2016 rezoning, East New York has seen an uptick in new development including Livonia Apartments and the Robert A.M. Stern-designed Edwin’s Place. Also, last year, not far from the site, the state opened the 407-acre waterfront Shirley Chisholm Park on a former landfill.